Home » Books » An Interview With Andrea Stewart, Author of The Bone Shard Daughter

An Interview With Andrea Stewart, Author of The Bone Shard Daughter

The Bone Shard Daughter is the debut fantasy novel from Andrea Stewart. It is the first book in her Drowning Empire trilogy. I reached out to the author recently to ask her some questions about the world she has created. A Chinese-American author, Stewart draws heavily from her cultural background for The Bone Shard Daughter. In this interview she tells us how she came up with the concept of magic powered by bone, why animal companions are so important in fantasy, and what we can expect from future books.

Many thanks to Orbit Books and Andrea Stewart for taking the time to do this interview with us at Comic Years. Check out the interview below, along with our review of The Bone Shard Daughter, out now from Orbit Books.

The Bone Shard Daughter has an incredibly unique fantasy world. How did you construct the world? Did you draw from any real-world geography or cultures?

I started out with a few basic assumptions about the world. I knew I wanted the story to be set on an archipelago of floating, migratory islands that moved between a wet season and a dry season. A lot of things followed from there: the complicated system of navigation, the availability of certain crops at certain times, the focus on trade and sailing. Culturally, I drew a lot on my experiences growing up–the food, the sense of family and filial piety, the expectations laid upon the next generation. I also drew some from my experiences traveling in China and Thailand, as well as a number of travel guides I checked out from the library regarding various places in Asia. And a lot of it I just made up!

Photo by Andrzej Suwara on Unsplash

How did you come up with the concept of the bone shard magic?

It actually started in a food court in San Antonio at WorldCon, when my friend Marina Lostetter (also an author!) nearly choked on a shard of bone she found in her food. Marina’s misfortune became the story seed for the magic system. I thought…what if shards of bone could be used for magic? It took me a while to grow the idea from there. I knew I wanted constructs in this world, so of course the bone shards would be used to power the constructs. And where did the power come from? Well, it had to be from the life-force of the people who had “donated” these shards. And constructs need commands, so the commands would be written onto the shards.

I have seen similar magical constructs to those found in The Bone Shard Daughter in other mediums – such as video games. Did you draw from any of those stories for inspiration?

I’ve always liked the idea of made creatures–creatures put together from various parts and given life again in a Dr. Frankenstein-ish sort of way. I can’t think of any specific stories or games I drew inspiration from, but I knew I did want to have that sort of video game progression to Lin’s storyline. She finds herself not only trying to unlock her father’s secrets, but also confronting his most powerful constructs. They’re essentially mini-bosses!

There is a long history of magical companions in the fantasy genre. What drew you to this concept when creating the character/creature that we know as Mephi?

Oh, I have a deep, abiding love for magical animal companions. Some of my earliest, fondest memories are of reading books where the character befriends a dragon, or a gyrfalcon, or a wolf, or a giant cat. I desperately wanted a dog or cat when I was a kid but wasn’t able to get a kitten until I’d moved away for college. And having the friendship and companionship of this tiny little creature was just as amazing as I thought it would be. They can bring out so many unexpected things in their human counterparts. Jovis is, in many ways, caught in the past. I knew he’d need a catalyst to start him actually living his life again, and Mephi forces him to care about the present again. 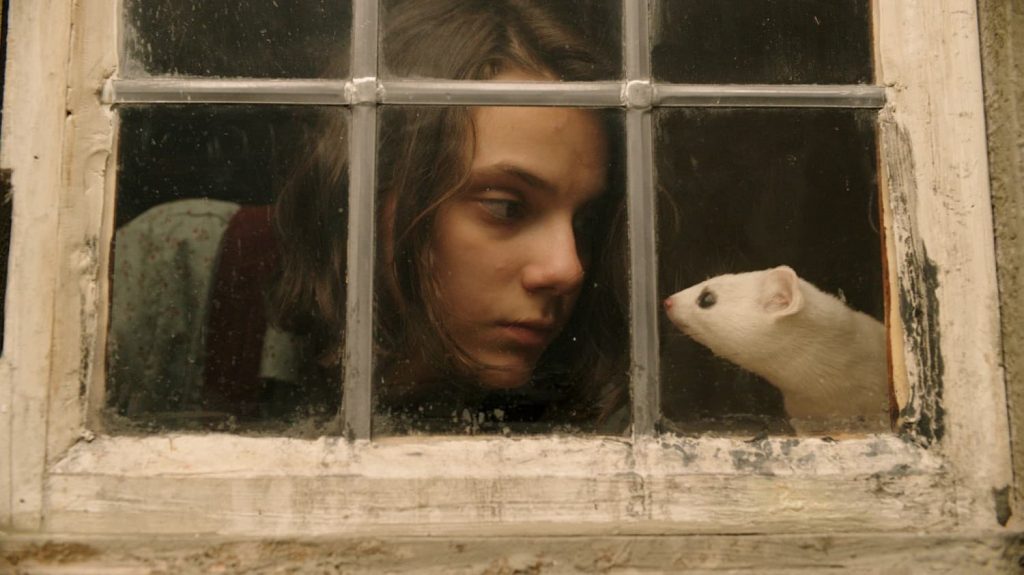 Character relationships seem to be the driving force for many of the character actions in the book. Why was it important for you to focus on the relationships between characters?

I think the relationships between characters are the backbone for a lot of stories. People are messy creatures full of longing, and I’m endlessly fascinated in the ways we trip ourselves up, the ways we try and fail to communicate, and the strength of empathy and friendship. And it’s so hard to care about the vast and great things in the world without first caring about the small pieces of it. In many ways throughout the book, the characters learn to see the greater implications of their actions by seeing how they affect the people closest to them.

There is an established romantic relationship between two women in The Bone Shard Daughter. Was it important to you to represent LGBTQ characters in this series?

I grew up reading a lot of your classic fantasy and sci-fi, as well as just consuming general media. I feel like, when I started out writing, I internalized a lot of those messages. The first characters I wrote were straight, white, and male. It was what I thought fantasy generally was. But as I grew older and my reading horizons expanded, I realized: fantasy can be whatever you want it to be. It was definitely important to me to represent LGBTQ characters in the series. Our world is so much more than just those people who are the loudest and most visible, and we all deserve to see ourselves in the stories we read.

Photo by Jiroe via Unsplash

For all of the problems in the Empire, it seems as though this society is relatively free of homophobia and misogyny. I found this refreshing after reading so many fantasy novels where those issues are still embedded in the culture. Why did you choose to construct your society and culture in this way?

Historically, there were cultures where homophobia and misogyny were less of an issue. And when I read fantasy novels where those issues are still embedded in the culture, it feels like a lot is drawn culturally from modern, Western influences. I wanted to get away from that, for my characters to be dealing with other issues at the forefront. I’ve seen and read the stories about characters overcoming discrimination–and while I still love those stories–I wanted to tell a different one.

There are multiple characters with POV chapters who don’t cross paths in the book. Was it difficult to weave the narrative together with so many different threads? Will we see more of the major characters interacting in the next book?

I plan each thread out individually, chapter-by-chapter, keeping in mind where they intersect, and then shuffle the chapters around until they make sense chronologically and story-wise! I knew the overall storyline and how the storylines affected one another when I started out, which made things a little easier. You will definitely see the major characters interacting more in the next book, as storylines converge even further. This is one of the most fun parts for me! Just seeing what they all make of one another and how they perceive each other’s actions.

You’ve spoken about how many books you wrote before publishing The Bone Shard Daughter. Do you think those stories will ever be published now that this book is a success?

I like to think I’ve improved through each successive book. I did self-publish a couple books in a different genre with a very different tone, but the epic fantasies will remain trunked. Learned a lot of lessons writing them, so I’ll never consider them a waste. I have new ideas brewing and new worlds I want to explore after this trilogy, so I’ll be devoting my future time to those!

What can we expect from future books in The Drowning Empire trilogy?

More constructs, more creatures, more revealed about the history of bone shard magic, the Empire, and the Alanga. More secrets uncovered. Bigger battles as the stakes increase. Changing alliances as people better understand the challenges they’re facing. You’ll see more islands, more of the people who populate them, and, of course, more food!

The Bone Shard Daughter is out now from Orbit Books. For more book reviews and author interviews, be sure to follow Comic Years on Facebook and Twitter today.